Relic of the Goths: The Kovel Spearhead

Sign up for the elements newsletter.  The Kovel spearhead is a central part of the core plot of the conspiracy thriller series The Elements on Mark-David.com. 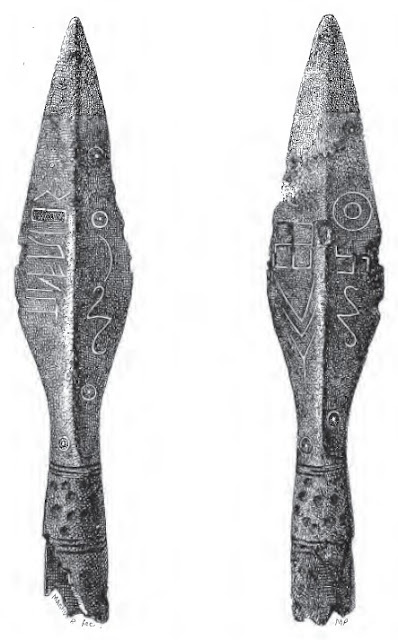 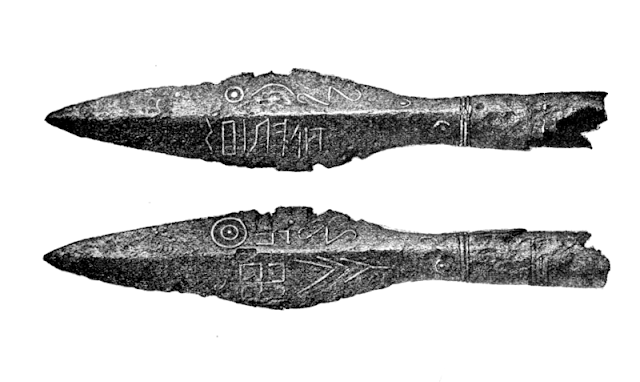 The Kovel spearhead is a unique relic of the time of the Goths that will feature prominently in The Elements.

‘The town itself lies in the North-Western Ukraine.’
‘Used to be Polish, before the Russians came along.’
‘Quite exceptional.’
‘A truly amazing find.’
‘Congratulations!’
‘But I am confused…’
‘You’re not the only one.’
‘First half of the 3rd. Century.’
‘Really, quite old.’ 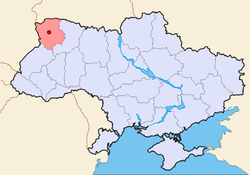 A time of the migration of a tribe vast in number who travelled south from their homelands in present day Sweden and the Baltic coast, a tribe of warriors who had a not so insignificant impact on the Roman and Byzantine empires. A warrior cult that also returned back to their homelands taking with them something of the culture of Rome and Asian peoples back with them. This is all Wikipedia has to say about the Kovel Spearhead:

The head of a lance, found in 1858 Suszyczno 30 km from Kovel, Ukraine, dated to the early 3rd century. The spearhead measures 15.5 cm with a maximal length of 3.0 cm. Both sides of the leaf were inlaid with silver symbols. The inscription notably runs right to left, reading tilarids, interpreted as "thither rider", the name either of a warrior, or of the spear itself. It is identified as East Germanic (Gothic) because of the nominative -s (in contrast to Proto-Norse -z). The t and d are closer to the Latin alphabet than to the classical Elder Futhark, as it were <TᛁᛚᚨᚱᛁDᛊ>.
An 1880 casting of the spearhead is exhibited in Berlin, an 1884 casting in Warsaw. The original was looted by Nazi archaeologists from its Polish owner in 1939 and it was lost altogether at the end of WWII.

The crescent form on one side of the spear head is a magical symbol, picked up by the Goths in their wanderings south. They brought them home to their people. Such a mark is called a tamga, inlaid in silver featuring crescent-shapes and arrow symbols thought to have been picked up by the Goths when coming into contact with people on the Black Sea. The use of such symbols in the Kragehul spearhead, similar, though not identical to the Kovel spearhead uncovered at the Kragehul bog near Flemløse in Denmark.

The runes on the Kovel spearhead read 'thither -rider'. The correct translation in Danish — favors someone or something that is going somewhere. Til means to, rid is the Danish root, like English, for ride - rids would be taken for riding, horses being the only source of transport for most in those days. A better translation is travelling towards ... placing emphasis on the action to the object: the runic inscription describe’s the spears trajectory.

The inscriptions on the Kragehul spearhead are of a different nature and read:

‘I am called the Herul Muha, Ansugisal’s (son). I cry a roar resoundingly, I invoke hail in the spear.’

The magical use of the spear in the warrior cult is well known in Germanic tradition. Hurling a spear into or over the enemy before a battle was a way of giving them to Odin, sacrificing them to the God of battle. As the Voluspá says: Odin had shot his spear over the host. (Rune Lore, Edred Thorsson, Weiser)

The Heruli could very well be a tribe of the Ostrogoths who migrated back to their homelands travelling across the Danish Isles back to what in time would be called Gothia. However, it is also the swastika tamgas that draw attention. No doubt this is what attracted interest in the spearhead. As well as the concentric circles  - this could be interpreted as a sun symbol. Or - as the shield pattern of the Heruli seniores, a Late Roman military unit composed of Heruli warriors.

The Kovel spearhead had been in the Ukraine, looted from a private Polish collection by SS-Untersturmführer Peter Paulsen, a member of the Nazi SS group called the Ahnenerbe, meaning literally 'ancestors inheritance'. The official mission of the Ahnenerbe was to unearth "new evidence of the accomplishments and deeds of Germanic ancestors using exact scientific methods." The Ahnenerbe later conducted experiments and launched voyages in an attempt to prove that prehistoric and mythological Nordic populations had once ruled the world.
Paulsen had been assigned to Poland after the German invasion in 1939. Reinhard Heydrich, then head of RSHA, sent Paulsen back to Kraków in order to seize additional museum collections and it could well be that this included the Kovel spearhead.

So what happened to it?

The spearhead was taken to the Ahnenerbe’s headquarters at Dahlem, Berlin. After that nothing is known, so it seems likely that is was appropriated by perhaps even Himmler himelf and taken to Wewelsburg? It has never been seen since.


A similar spearhead is the spearhead of Dahmsdorf-Müncheberg inscribed with ranja (ᚱᚨᚾᛃᚨ) (Ulfilan rannja, meaning "router".) This displays similar methods of silver inlay and tamgas including the crescent moon and others of unknown origin. As with the Kovel spearhead, a swastika is used as a decorative motif, together with the three-armed spiral or trifos inscription. Both represent the forces of nature often associated with the sun. 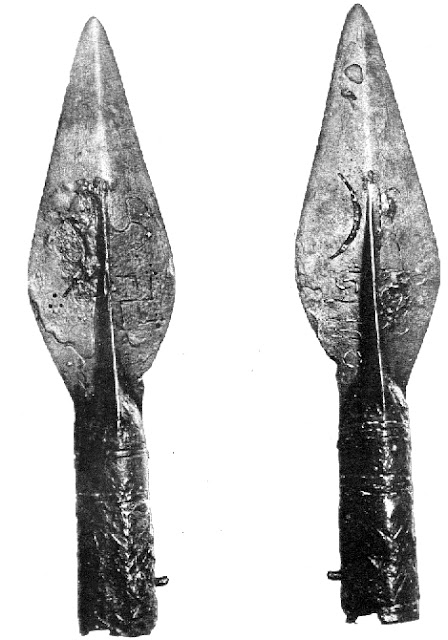 The Elements community on google+